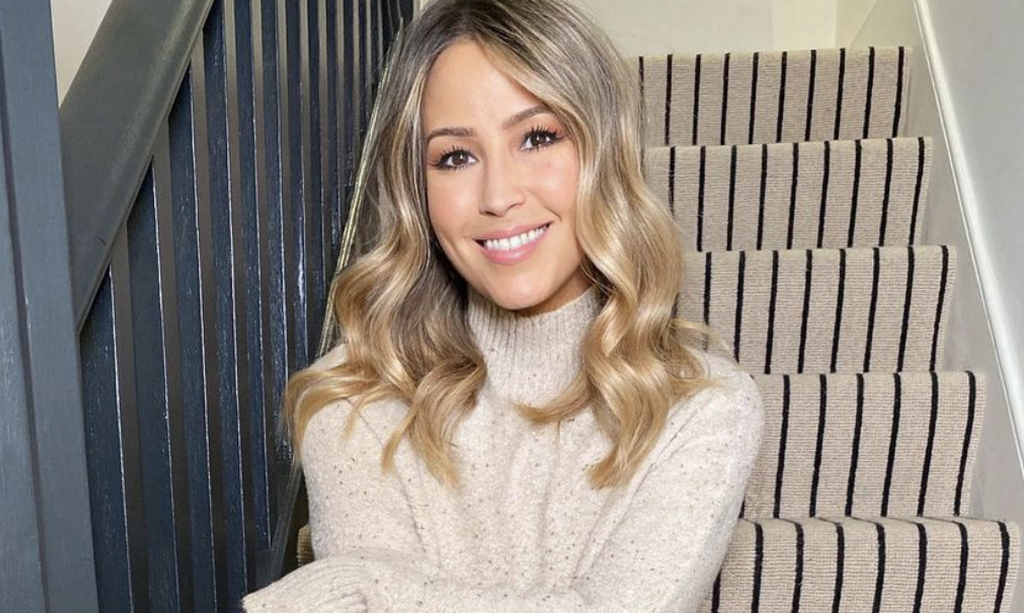 Rachel Stevens has spoken with “The Times” regarding her finances, to include investment properties, the very first car she ever purchased, and how exactly she was discovered for her time in ‘S Club’.

Check out the full interview below!

Rachel Stevens was one seventh of the irrepressibly cheery pop group S Club 7, who racked up four UK No 1 singles and two Brit awards. Stevens, who grew up in Southgate, north London, went solo after the band split in 2003 and Sweet Dreams My LA Ex made it to No 2. She lost out in the final of Strictly Come Dancing in 2008 to the Holby City actor Tom Chambers and has appeared as a judge on The Voice in Ireland. Now 43, she writes a fashion and style blog and lives in north London with her husband and childhood sweetheart, Alex Bourne, an actor who is in property, and their daughters Amelie, ten, and Minnie, seven.

How much is in your wallet?
I never usually carry cash, but I’ve got about £25 in my purse at the moment because there’s so much going on with my children, like the end-of-school fair. That’s a lot of money for me — I feel rich!

Which credit cards do you use?
I like to know what’s coming out, so I use debit cards. I’ve got a joint card for home and family stuff, and my own card. I’m with Santander and I’ve got the 123 current account where you get money back when you pay certain bills. There’s a Santander on my high street, and pre-Covid it was easy to pop in and do what I needed to do. I’m getting better with the online banking thing, but I’m not very techy and I’m quite old-fashioned: I like to speak to someone and do things in person, especially with money. I sound like a granny!

Are you a saver or a spender?
I’m not a saver. I’ve always had a strong work ethic, but I didn’t grow up knowing how to budget. I went from having no money to making money, really fast. I don’t even know how much I made. The money came in sporadically, so it wasn’t like a nine-to-five job where you’re getting paid each month. I believe that money knowledge needs to be instilled from a young age. That’s why I’m trying to teach my girls, in a gentle way. When I give them pocket money, I explain: “You’ve got this amount. This is how much you can spend in the shop.” I’m looking at a bank account for kids called Gohenry. I think it’s a brilliant idea and they can start from age six.

Do you own a property?
I’ve bought and sold four properties and made money on all of them. I was 22 when I bought my first property — looking back that seems crazy. It was a flat in Hampstead, in a new complex with a gym, pool and a 24-hour porter, so there was someone to take my deliveries when I was away. It suited my lifestyle at the time, and because I was young and on my own, it was important that I had somewhere I felt safe. I bought it for about £500,000 not long after our first single, Bring it All Back. Four years later I sold it for a profit of about £100,000.

Are you better off than your parents?
Yes. My mum’s a hairdresser and my dad was in sales. My dad was a hard worker, but he went from making money to losing money, to making money, to losing money. He was always, like: “There’s a deal coming!” My parents weren’t rich, but we had everything we wanted. I felt rich because I was always family-orientated and we had the most wonderful time. We lived in Southgate, and for a family treat we’d go to this rib shack in the West End called Biguns Ribs, where we’d get bibs and do colouring in. It was so fun and the ribs were delicious. It was one of my favourite nights out when I was little because I was fascinated by the West End. It felt so grand and I was obsessed with the old buildings.

Have you ever been really hard-up?
My parents separated when I was 16 or 17 and we lost our family home. I was living in Cockfosters with my mum and my brothers, with no money coming in. My memories are blurry because emotionally it was a hard time, but I remember counting pennies to put £2 of petrol in the car so I could drive to the Tube station. I was at London College of Fashion doing a GNVQ in the business of fashion, but I don’t think it made me business savvy. When I’ve spoken to people I did the course with, we’ve been, like: “What did we actually learn?”

I hung out with my friends and tried to ignore what was going on with the family stuff. I wasn’t good with money, so I scrimped and bought clothes because that was all I wanted. There was a shop in Bond Street station where me and my friend would buy a top as soon as we got a bit of money, and once a week we’d get a chicken chow mein. My brother worked at Sony, the record label, in the café there. I used to go in for a free lunch and that’s where I had my sliding doors moment because when I was about 18 I was approached by some producers who asked if I could sing. That’s how I ended up in S Club 7.

Do you invest in shares?
I’ve had a pension since my mid-twenties. S Club 7 was a crazy time in my life. We were always in a different country and it was so fast-paced, my feet didn’t touch the ground. We weren’t given any financial advice and I definitely didn’t have any knowledge about pensions, but I got advice for myself quite early on. I was probably 20. I went with a financial adviser who’d been recommended by a family friend and I just went with what they said.

What has been your best investment?
My home. I’m such an advocate for property because it’s always there.

What has been your worst investment?
All my weights. I’ve spent a few hundred on gym stuff and it just sits there looking pretty. I did try for a while, I’d love to be that person, but I’m just not into weights. I’m more for getting out for a walk, or doing yoga. I’ve actually just got into Peloton — it’s great fun, so I’m getting into a good routine with that.

What’s your money weakness?
Clothes. I love clothes so much. Tops, dresses, shoes, bags — I just love fashion. There’s lots of shops I can’t walk past without going in, but I’m a real high street girl. I love Zara, H&M and & Other Stories. I’m specific now with what I buy because as you get older you know your own style, so I’d rather invest in forever pieces, then add the more trend-led stuff. It doesn’t have to cost hundreds. I think the high street is amazing — you can get a great cashmere jumper from H&M. I love online shopping too, but oh my God it’s dangerous. I’ll find myself on Net-a-Porter; it’s just so easy, isn’t it? I definitely shopped more over lockdown. My wedding dress was my most expensive item of clothing: it was made by an Israeli designer called Mira Zwillinger and I added to the design.

What was your most extravagant purchase?
I’ve got two brothers who are really into American cars, so I love cars, and when I got my first pay cheque I bought a Mercedes SLK-Class. I was 21 and it was so exciting because it was my first proper purchase. It was about £27,000 and it felt extravagant, but it was something I’d wanted from the time I started driving.

What’s better for retirement, property or pension?
I guess ideally both, but I’m not grown-up enough to know that answer

What’s your financial priority?
My kids. I’m thinking of their future. But it’s all about balance because money is wonderful and you’ve got to enjoy it. There’s no point in sitting on it and not spending anything, but it’s important to think ahead. Finding that balance has been a real learning curve for me and I’m still striving to achieve that.