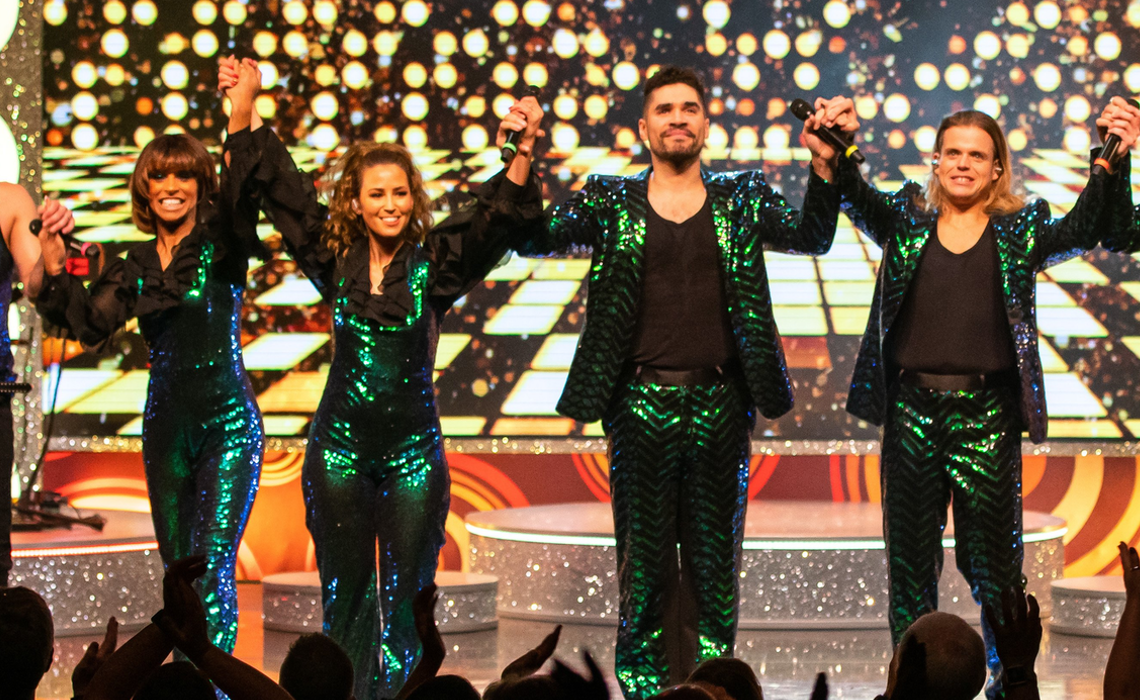 Rachel Stevens, 41, (pictured) who is best known for being in S Club 7, revealed she was attracted to Rip It Up because of the amount of dancing involved

Now she’s focused on touring the UK. ‘I saw Rip It Up The 60s in the West End.

I loved its energy, although I could see how much hard work went into it.

I know we’ll be featuring Tiny Dancer, perhaps my favourite Elton John song ever, Gladys Knight’s Midnight Train To Georgia and Harry Nilsson’s Without You, which I think I’m going to be singing.’

Rachel Stevens, 41, who came second on Strictly with partner Vincent Simone in 2008, had been on the look-out for another dance project after touring with a reformed S Club 7 in 2015.

‘There’s a lot of dancing in Rip It Up and that was one of the things that first attracted me to it,’ she says.

‘I also love 70s music, I grew up listening to it. Then I went to see Rip It Up The 60s and I understood how the show hangs together.

‘By the end of the evening I was on my feet like everyone else.’

But life these days is all about juggling for Rachel, who’s married to actor and property developer Alex Bourne, the father of her two daughters Amelie, eight, and Minnie, five.

‘I have a great support network. My mum lives round the corner, my parents-in-law are nearby and we’ve had an au pair for two years.

‘My work is sporadic so it’s a question of logistics.’

The girls are her priority though. ‘I’m super-organised and they always know where I am and what I’m doing.

‘In fact, I have a large whiteboard at home which has every detail on it of what I’m doing.

‘I think when children know what’s going on, they feel reassured.’

Does she think S Club will ever reform? ‘We get asked that a lot. But because there are seven of us and we’re all so different, we’re all doing our own projects.

‘But it would be amazing if we did.

‘The last tour was such a celebration of what we had and there was clearly an appetite for us. But then music is such a potent form of nostalgia, isn’t it?’

In this new show Rachel is particularly pleased that she’ll be singing We’ve Only Just Begun and hopes she’ll do justice to Karen Carpenter’s peerless original.

‘And then I’ll be part of various medleys and mish-mashes too,’ she adds.

She hadn’t met Melody Thornton before rehearsals began, but in 2014 she took part in the Strictly Christmas special with Louis and S Club were on the circuit with Blue, who were big around the same time.

No need to ask her who she thinks is going to be the joker in the pack. ‘Oh, Lee,’ she laughs.Additionally, check out the recent videos uploaded from the “Rip It Up” Twitter, to include interviews with Rachel regarding some of her favorites from the 70s! (Source: Daily Mail)

Rachel will be joined by Olympian Louis Smith, former Pussycat Doll Melody Thorn, and former Blue member, Lee Ryan. The show kicks off this Wednesday, September 11th in Portsmouth and will run through the UK until November 6th.