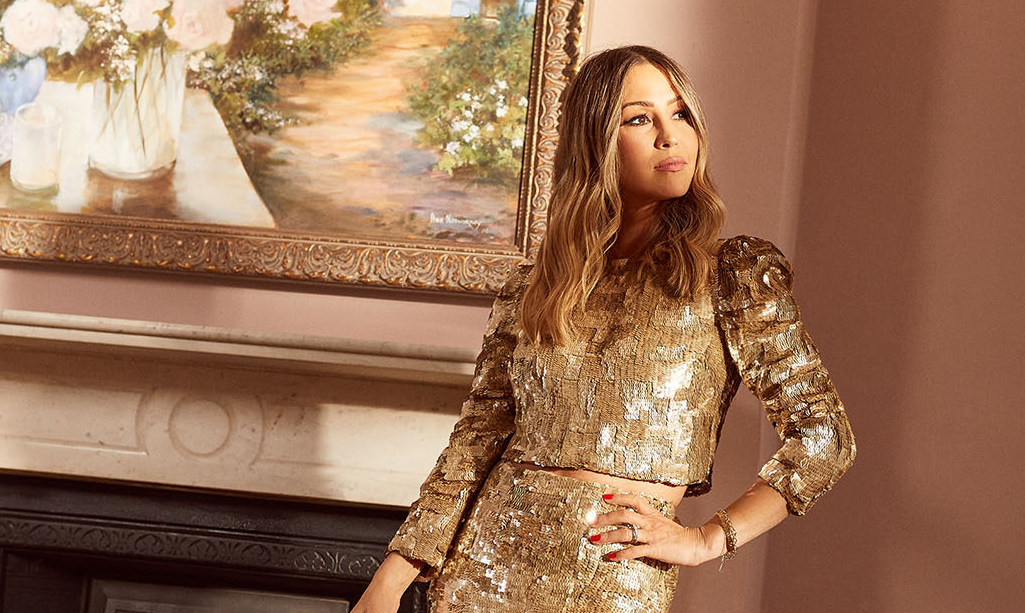 Rachel has sat down and spoken with Sandy Rashty at The Jewish Chronical about her upcoming performance on ITV’s ‘Dancing on Ice’ (set to debut on ITV in January). In the interview (probably the best interview in a very long time), Rachel discusses how to juggle being a celebrity and a mother, her time in S Club, her marriage to Alex, and a bit of how shes feeling about Dancing on Ice.

Check out the interview below:

By her own admission, Rachel Stevens is a perfectionist.

Famed for her part in award-winning British pop group S Club 7, Stevens went on to launch a successful solo career, took part in competitive TV shows like Strictly Come Dancing (she was runner-up in 2008), and has collaborated with fashion brands from Oasis to jeweller Laura Gravestock.

Now, she is turned her attention to the skating rink for the upcoming series of ITV’s Dancing on Ice, which airs in January. Stevens, 43, has a mixture of emotions ahead of the live shows.“I am such a perfectionist, it is a challenge,” she says. “I am having a lot of mixed feelings as I have a tendency to put a lot of pressure on myself.

“I need to push myself to be the best I can be, for myself and my skating partner. When you are a bit of a perfectionist, you can get in your own way. I need to push through that and just have fun.”

Partnered with skater Brendyn Hatfield, she has committed to practising for at least two hours a day, five times a week at Alexandra Palace’s ice rink in north London, a short drive from the home she shares with her two daughters and husband Alex Bourne, who works in property.

“The juggle is real at the moment, it feels like we have all gone from zero miles an hour, to a hundred.” She heads to the rink in the morning, after dropping her children off on the school run. She has skated, twirled and been carried across the ice.

“I was chucked up in the air earlier on,” she laughs. “It is such an interesting skill to learn and the skaters make it look so easy. The days when you make progress feel so good. Dancing is hard enough, but on the ice there is a loss of a sense of control.”

While she is excited about skating, she is also looking forward to working with the show’s wardrobe team on the “sparkly” outfits – the same stylists who work on the BBC’s Strictly Come Dancing. Stevens was once the ultimate pop princess.

Aged 19, she was invited to join S Club 7 out of more than 10,000 hopefuls who auditioned for the band, and together, the group of three boys and four girls were a success with hits including Don’t Stop Moving, Bring It All Back and Never Had a Dream Come True.

They toured the world, performed dance routines at sell-out concerts and even had their own TV show. Stevens had no formal singing, dance or acting training, but she “learned on the job”. She was often photographed wearing pastel-coloured crop tops and flares, with her trademark smile, tan and honey-coloured highlights.

She featured on FHM’s Sexiest Women lists for 11 years in a row and was once voted Sexiest Woman of All Time by its readers, Though she “got to do the most incredible things with amazing opportunities,” the band were running on little sleep and were under a lot of pressure.

“I have a strong work ethic and like to be busy. We really put in the hours. We had a TV show, movies, radio tours, arena tours, Saturday morning kids TV and photoshoots. It was pretty much 24/7.” It had an impact. “I remember splitting up with a boyfriend, crying my eyes out and then having to get up and sing Reach.

We had a young audience and I ended up playing a role, putting a show-face on. That was one of the hardest things for me. “I pushed everything down and was very good at hiding how I was feeling. A lot of times I would shut down, put on that face — but I was not really there.

It is something I have had to work through as I have gotten older.” Her career also offered a chance to escape from personal problems, she adds. “It is quite hard being in the public eye. Everyone deals with it in a different way.

“It was personally a difficult time. My parents were separating and everything was up in the air. S Club was something to focus on and it took me away from everything that was going on at home. It gave me purpose and structure.”

In 2003, S Club 7 performed their final show after five years as a band. Stevens remembers the group leaving the arena in separate taxis — and they did not perform together again until a reunion show in 2015. “It was difficult.

We had spent all those years together every day, but after the show we took separate taxis and that was it. There was no ‘goodbye party’. There was no closure on something so incredible. I remember feeling a bit shell-shocked.” “I was really career-driven in S Club 7.

Everything was diarised and having that structure taken away was difficult for me. It still is sometimes.” She went on to launch a solo career, with hits Sweet Dreams My LA Ex and Funky Dory. “I needed to stop and have a break, but it was not in me to do that. I felt I needed to keep going.

“It was really successful, but I think on reflection I could have been a lot more present.” She has since lost touch with other members of S Club 7 which can make her feel “sad”, though they do sometimes support one another or exchange messages on social media.

With 255,000 followers on Instagram, she has cultivated a strong following for her lifestyle and fashion content. For Stevens, who studied business at the London College of Fashion, style has long formed a big part of her identity.

“I grew up around fashion, my mum and grandma were always so glamorous and had a real love for it,” she says. As a child, she would visit the womenswear boutique where her grandma worked. “I was always amazed by the clothes and the ladies trying everything on, from the fabrics down to the bags and even the packaging.”

Stevens intended to pursue a career in the industry — initially “untangling hangers” at a shop on Great Portland Street, before going on to consider a job in buying merchandise.

“I just wanted to go out, work and start making money so I could buy all of these clothes!” But aged 17, she was approached while having lunch in a canteen, by a music production team that worked with Simon Fuller, former manager of the Spice Girls. Fuller went on to manage S Club 7.

Stevens took the opportunity, which led her into showbusiness. But now, she has found a way to pursue her initial dream of working in fashion. She uses Instagram to post photos and videos of her outfits and brand collaborations.

She says that what we wear has changed since the outbreak of Covid-19. “I will now style a pair of joggers with a blazer. You can elevate a look.” She adds: “Style is such a big part of who we are, it’s the armour. It empowers me and gives me confidence.”

While she uses the photo-sharing platform to promote content, she is conscious of the impact that using her phone could have on her children Amelie and Minnie, who sometimes take the snaps. “When you work for yourself, it’s not a nine-to-five job,” she says.

“It is a tricky balance, because I do not want to be on the phone too much when I am with my family but I do feel that pressure to post, and I love it.

“We have just given in and bought Amelie a phone when she turned 11. It is tricky to try and teach the children to not be on the phone, when I am on mine.”

I wonder whether she would be happy for her daughters to one day work in the music industry. It turns out that Amelie already has a role in a West End musical. “She is loving it and it is the most incredible experience, but I am torn. I want them to be happy and love what they do, but I want them to love it, not want it for fame.”

For Stevens, family is key, and Judaism a core part of her life. She grew up in Southgate, the daughter of a hairdresser and a salesman from the East End. She first met her husband aged 12, at the Jewish youth club, Oxford and St George’s.

They went on to attend barmitzvah parties together and were in the same social circle during their teenage years. She was “besotted with him, he was so cute with his curtains haircut” and he says that from the moment he first saw her, he knew that they would one day get married.

They went on one date aged 18, but then their lives went in different directions. Ten years later, they bumped into one another in Selfridges and “the rest, as they say, is history”. In 2009, they had an Orthodox Jewish wedding at the Claridge’s Hotel in London.

Their children attend Jewish schools and look forward to Friday night meals, where she lights the Shabbat candles and her husband will say kiddush — and often make dinner. “Alex is the big cook in the house,” she says.

Before the pandemic, the family were members of Finchley Reform Synagogue but for Stevens, Jewish life is more centred on tradition, family and food than synagogue. “Friday night dinner is such a special thing. Having that one night a week sat around the table is something that I want to keep going, especially as the girls get older,” she says.

“Some of my fondest memories are of sitting around a table together. There is a sense of safety, security and I am very family-orientated.” But sometimes, the transition to a quiet family life from the glittering side of showbusiness can be “really hard”.

She says: “I am someone who needs to work and needs that creative outlet. It is an important thing to show my girls and I am trying to do something I am passionate about.

“I do not want to sound cheesy, but the thing that drives me is, I want to be the best person I can be. We all have the potential to be the best version of ourselves.”

At the same time, she says: “I want to be happy, be present and not have to get things perfect all of the time. That is something I need to learn.”